Roofs have unlimited potential that is only restricted by the architect or builder’s fantasy. But how do you best make the green dream come true on a roof?

You could say that with Vega Scene we have transformed and upgraded what was an ecologically dead area and, at the same time, laid the foundation for the next generation to manage the surface water in densely populated areas. This has been made possible with Protan’s solution and product robustness, says Andreas Christoffer Pay at Urbanium.

Oslo city centre, July 2020: With a pleasant summer breeze in your hair, you walk barefoot across the terrace passing tomato and strawberry plants in full bloom. As you lie down on the sunbed while the barbecue sizzles in the corner, a bee buzzes past looking for nectar in the sunflowers you planted in spring.

From the roof terrace you look across to the neighbouring buildings’ large, grey and dead roof surfaces, interrupted by a few rusting and humming dinosaur ventilation systems, clusters of old satellite dishes and tangled tubes and cables. You sip the lemonade you made from lemons on the trees behind the rhubarb and smile without a care at the radio announcement of heavy precipitation in Oslo this evening.

What is a bluegreen roof?

The description of the carefree sunbather in an oasis at the top of a building in the city centre of Oslo is not just a thought experiment. Roofs have an unlimited potential that is only limited by the architect or builder’s fantasy.

Look at an aerial photograph of any Norwegian city and see the possibilities. What about a nursery school at the top of Hotell Norge in Torgallmenningen in Bergen? Formation training with Rosenberg on the roof of St Olav’s hospital? How about visiting the city’s best park and restaurant run by clean energy from a solar park on the roof of Oslo City Hall? Or simply increased property value and better quality of life for residents through access to the roof as an extra floor for recreation, where people can enjoy themselves among flora and fauna – a new urban, ecosystem?

"By replacing roof tiles and roofing felt with natural biotopes that belong in Oslo, we can contribute to a reduced footprint from people", says Andreas Christoffer Pay, CEO of property developer Urbanium.

Urbanium has a clear focus on the environment, recycling and ecology and is a leader in the construction of green roofs, for example, at Sørenga in Oslo.

"We see that in recent years architects are realising the æsthetic value of roofs and the fact that they can be used for more than just a place to go. The green roof has become a part of the landscape plan", says Pay.

The fifth and forgotten façade

The possibilities for a green, living and accessible rooftop are almost infinite. But the sunbather’s radio still warns of torrential rain this evening. How is it that she can smile so easily when we see what happens to rain and the drainage system every time the heavens open over a Norwegian city or town?

After all, she knows that the downpour will be stronger than what the city’s infrastructure is built to handle, and the consequences of environmental damage every year.

This is why it’s important to establish a surface water system. There is not enough space for this in densely populated areas. Besides, it is costly to dig up streets and pavements. Therefore, the solution lies above us, without sacrificing Urbanium’s ecological projects, the sunbather’s lemon trees or the potential solar panels on the roof of the city hall. Bjørn Nordseth, head of sales at Protan, explains:

- The answer is bluegreen roofs. Blue because the roof is converted to a surface water reservoir that slowly attenuates torrential rain into the drainage system, and green because the building’s fifth façade, which is at present used for ventilation systems and cable gates, is replaced with nature and outside areas.

A scene for commitment to the environment

Urbanium’s first bluegreen roof can be found in the Hauskvartalet (Haus Quarter) in Oslo. It’s at the top of the brand new Vega Scene. The whole area has been turned into an ecological-cultural quarter of the city, something that required more than a roof than can handle surface water. The blue roof had to be combined with the green feature and that’s where Protan stepped in with its BlueProof Green solution.

"You could say that with Vega Scene we have transformed and upgraded what was an ecologically dead area and, at the same time, laid the foundation for the next generation to manage the surface water in densely populated areas. This has been made possible with Protan’s solution and product robustness", says Andreas Christoffer Pay at Urbanium. 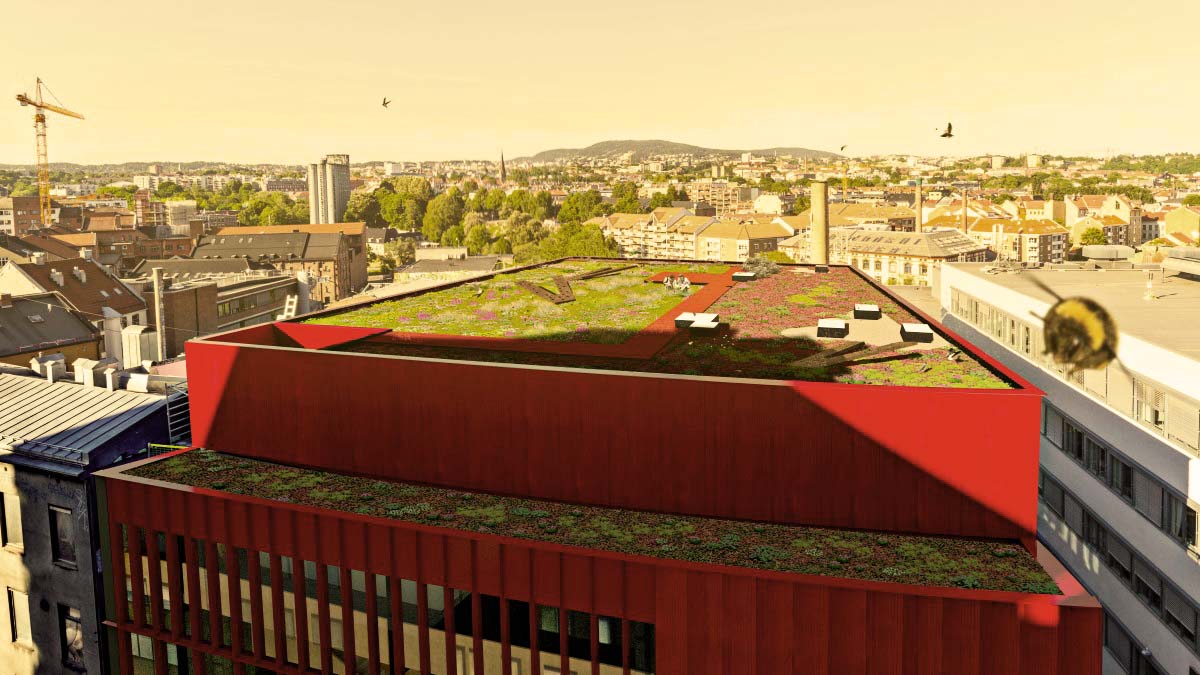 Vega Scene: Oslo’s first bluegreen roof is at the top of Vega Scene. The entire area has been turned into an ecological-cultural quarter of the city, something that required more than just a roof that could handle surface water. A Protan membrane lies under the sedum layer. Photo: Urbanium

The BlueProof Green concept is being followed closely by stakeholders such as Oslo municipality’s Agency for Water and Sewerage Works and the Norwegian Directorate of Construction and Property. It’s not just the potential solution to the surface water problem, which we see unfolding in the streets every year, but the green roof contributes to the building’s ecological footprint.

With the bluegreen roof Urbanium has created a unique and living building that changes character with the seasons – at the same time allowing us to smile without a care at torrential rain pouring down outside the window.

Protan BlueProof Green combines secure surface water management with a green garden on the top of a building. This is what we call a bluegreen roof.