The roof that will change the future of the construction industry

– What’s happening on the roof here is a gamechanger for the construction industry and something that everyone will be striving for.

So says Rune Skeie, urban ecologist and landscape architect at Asplan Viak, while he looks out over blooming plants, petals blowing in the wind, and busy butterflies and bees on top of Norway’s first bluegreen roof – in the middle of Oslo city centre.

What is a bluegreen roof?

Behind the signal red façade of the new Vega Scene building in the Hausmannkvartalet (Hausmann Quarter) there are state-of-the-art cinemas and theatres, restaurants and offices, but it’s what happens on the top of this cultural building that makes it unique and groundbreaking. A close development cooperation between property developer Urbanium, architects Asplan Viak, researchers from the Norwegian Institute for Bioeconomy (NIBIO), sedum experts at Bergknapp and roofing and membrane specialists at Protan, has resulted in a bluegreen roof that is attracting attention far outside the borders of Norway.

A gamechanger for the construction industry

A bluegreen roof solves the surface water problem, associated with extreme precipitation, up on the roof. It also combines with various green solutions on the roof, for example, roof gardens, terraces, sports surfaces, beekeeping and solar panels.

Norway’s first bluegreen roof has also created a rare research area, where flora and fauna found on the islands in the Oslo fjord are planted, to the delight of birds and insects. In addition, during torrential rain, the roof acts as an attenuation site that gradually, and in a controlled way, drains filtered water into the nearby Akers river, instead of flooding an already overburdened drainage system. 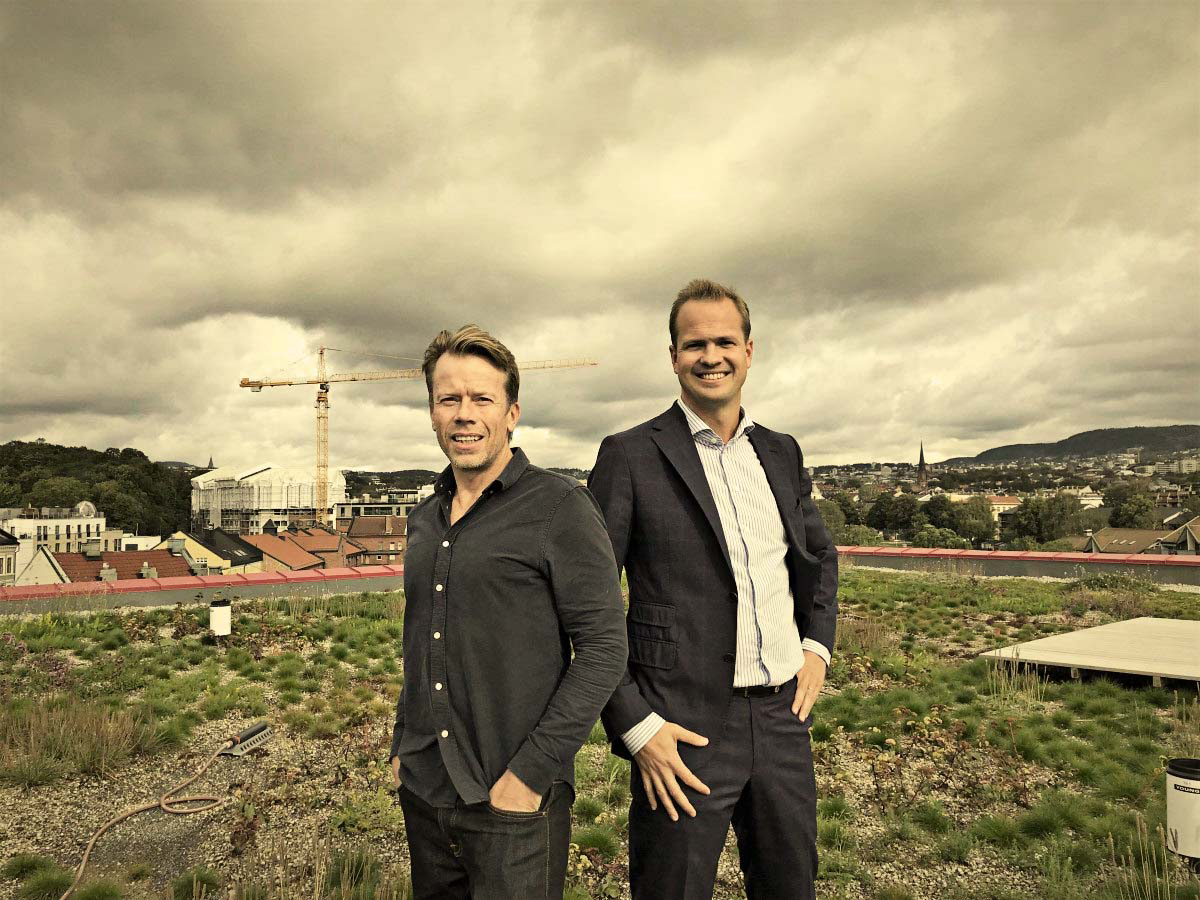 Rune Skeie from AsplanViak and Andreas Pay from Urbanium are proud to have worked on the development of Norway’s first bluegreen roof. (Photo: Protan AS)

The fertile oasis at the top of the Vega Scene is just one of many ways in which a bluegreen roof can maximise the use of a roof surface. The solution is pioneering evidence that something big is happening in the modern construction industry and why Skeie uses a word like gamechanger.

– With Vega we helped develop the first bluegreen roof in Norway, and I believe the result of this will be a goal that major players will strive for in the future. In a few years bluegreen or multifunctional roofs will be common in newbuilds.

Since the pioneering bluegreen Vega roof demanded several research resources, massive profits were not the motivation for this project. But Urbanium has strong environmental ambitions and stands for the green transformations of central city areas like Hausmannkvartalet. Visionary CEO Andreas Pay is now just looking to the future.

– After the Vega project we are now close to zero development costs for future bluegreen roofs. What we have actually been doing is micro-innovation, but with such an extensive ripple effect that we believe this will impact the entire industry. If we manage to industrialise solutions like this, we are really talking about a green shift. 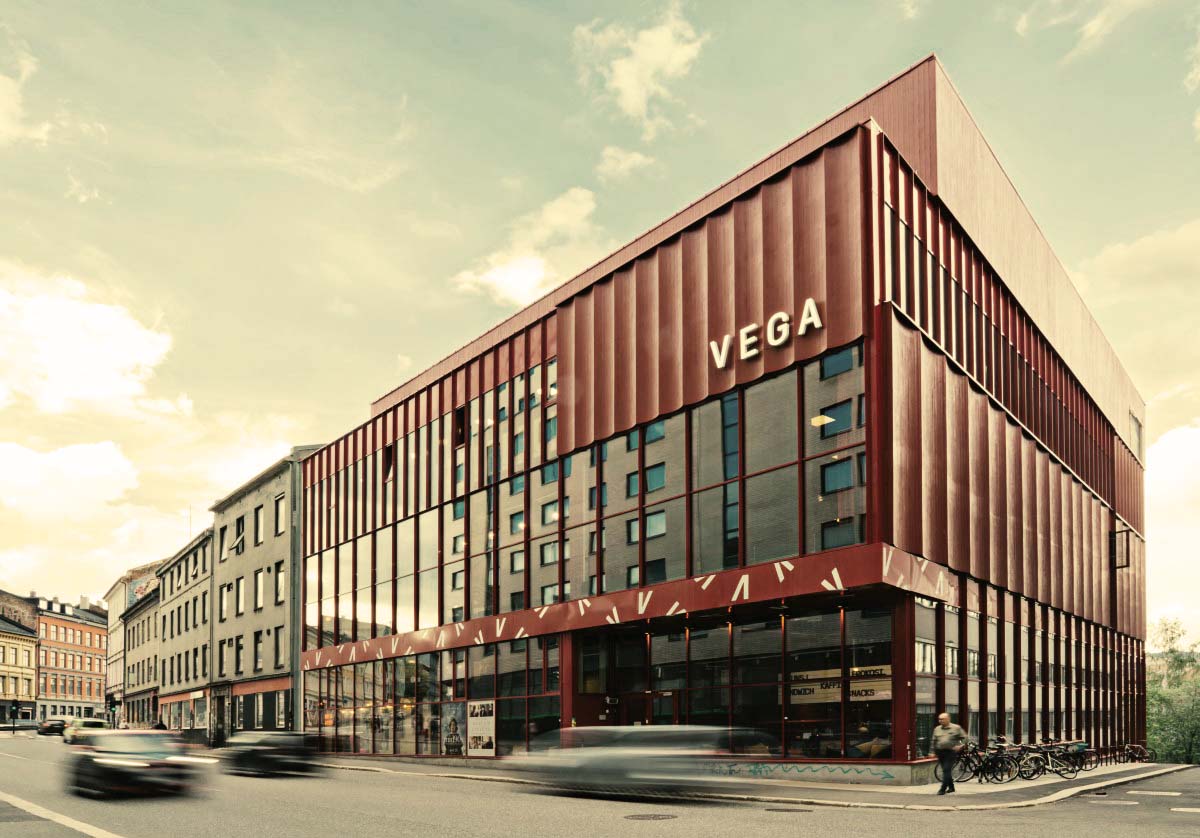 Vega Scene’s signal red façade is striking in itself, but what happens on top of this cultural building is what makes it unique. (Photo: Gitte Paulsbo)

Skeie from Asplan Viak agrees, pointing out that Vega’s unique bluegreen roof is a solution to two of modern society’s biggest challenges, namely the destruction of nature and the fact that extreme weather is becoming the norm:

– Bluegreen roofs mean we can reduce our carbon footprint by replacing roofing felt, asphalt and concrete with flowers, bees and ecological diversity. At the same time, society will save on high costs related to flood damage by managing surface water on the roof. In this way, we create green lungs in ever more built-up areas. These green lungs absorb airborne dust, thus creating better air quality, says Skeie.

A lot of recognition

Its special roof solution is one of the main reasons why Vega Scene is Norway’s first cultural building with BREEAM-NOR Very Good certification. In addition, it was also one of three finalists for Oslo City’s Architecture Prize in 2019. The building’s Protan BlueProof Green was also nominated for the Norwegian Building Industry Innovation Prize for 2019, with Protan and Bergknapp being jointly nominated.

– BlueProof Green is an important piece in the large puzzle of sustainability and future building methods and mindset. The solution not only meets today’s demands and needs but also those of the future, said jury head for the prize and director of Customer Operations at Innovation Norway, Kristin Malonæs. 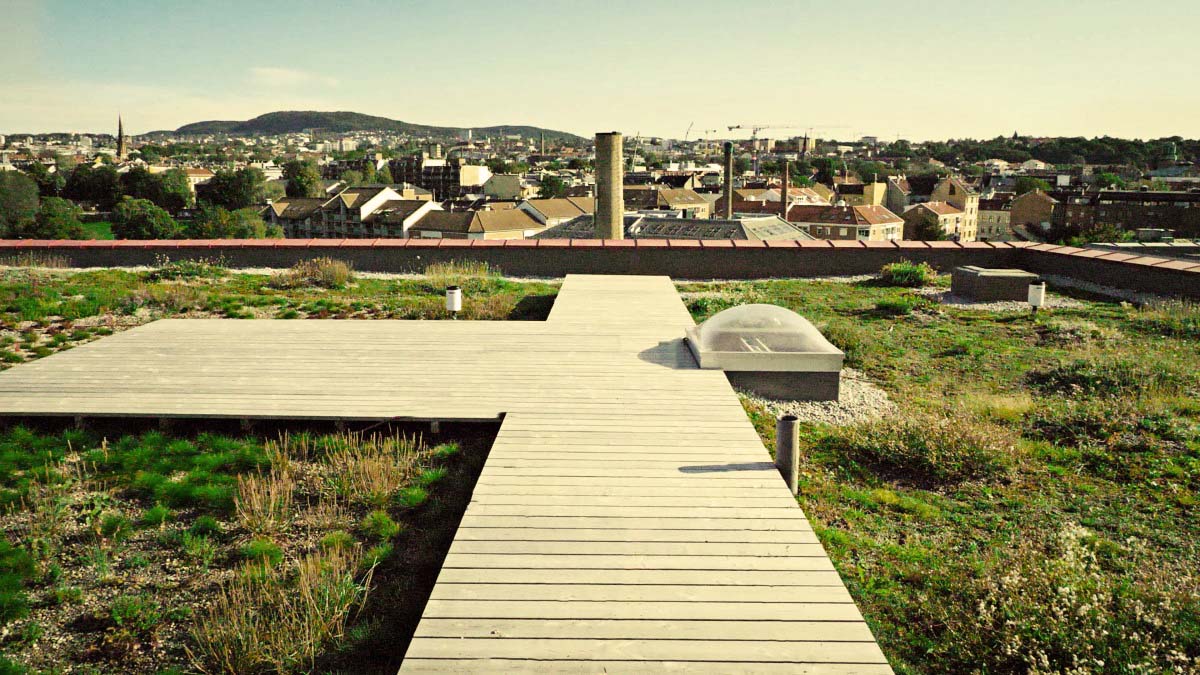 After only a year, the roof has become a favourite place of bees, bumblebees, butterflies and birds. (Photo: Christian Bjørtomt)

– Practically, by combining surface water management with green areas, the bluegreen roof has saved the developers of Vega Scene major costs associated with digging, as well as pipes, containers and storage solutions associated with water drainage. Not to mention costs for transporting and disposing of substances that could well cause pollution. 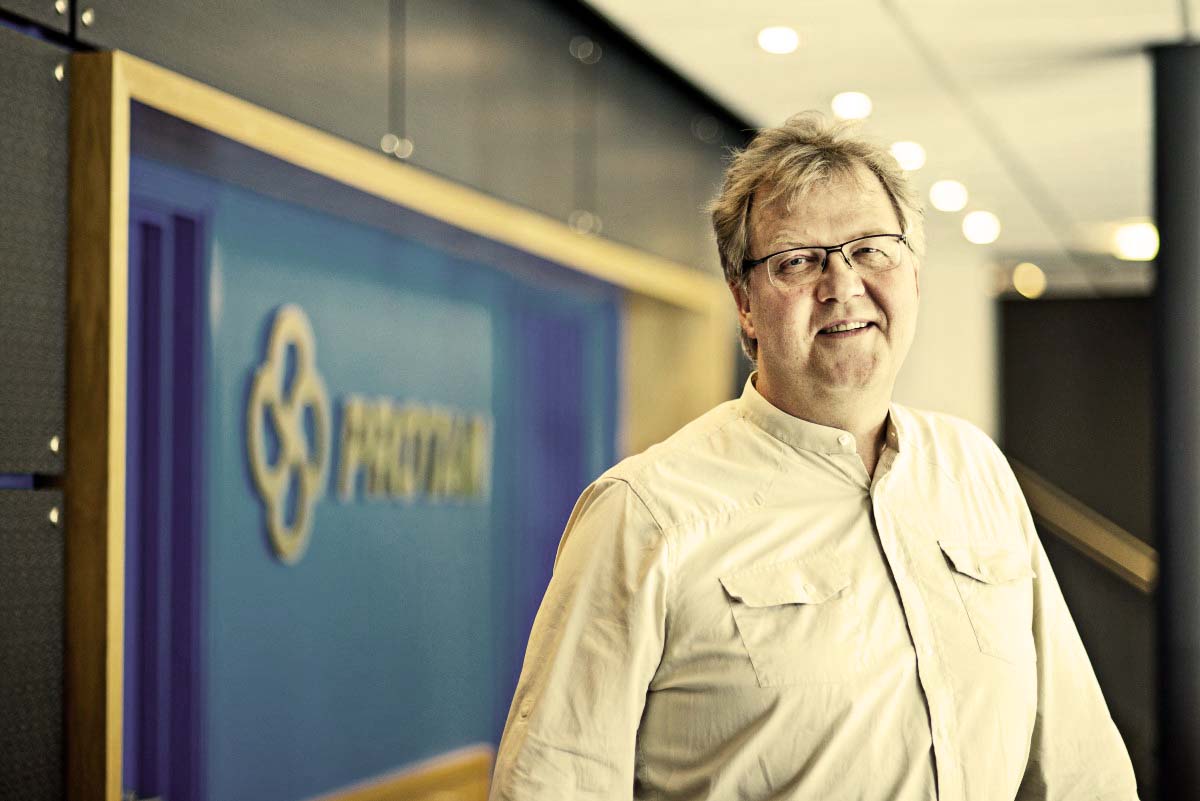 Bluegreen is sustainability on the roof

Nordseth explains further that green roofs, be they in the form of gardens, roof terraces or, for example, exercise areas, contribute to increased quality of life and environmental quality for residents and tenants.

– And, of course, it is highly sustainable to use all the surfaces and areas of our buildings optimally. If not roof gardens, what about solar energy panels? In addition, with a bluegreen solution water on the roof can easily enter into other water cycles on a property, such as grey water or be used to water green areas. Now we are talking about buildings with real energy and circular economy effects, he says. 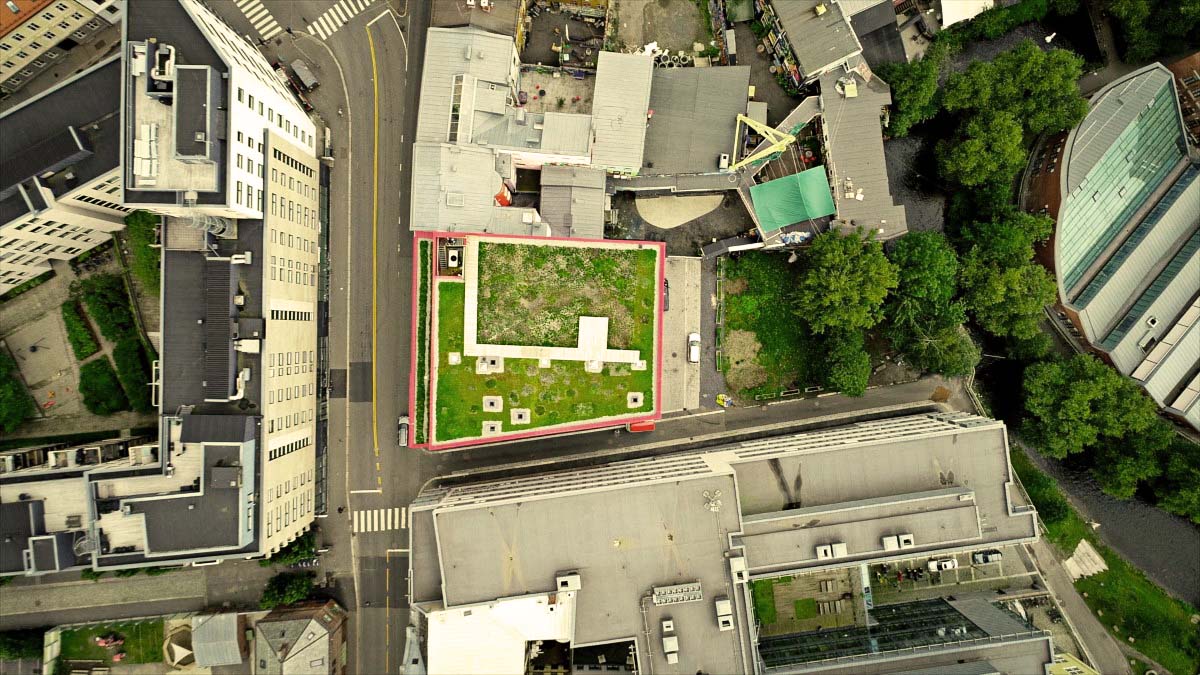 Increasing urban densification, requirements for surface water management and a strong desire for green solutions has led to a sharp increase in demand for green products and solutions. Thus, it won’t be long before Vega Scene is not Norway’s only bluegreen roof, and this prospect makes Andreas Pay and Urbanium happy. From where he stands on the top of the cultural building in smart shoes among the succulents, sedum growth and buzzing bees, he hopes that in a few years there will be less satellite dishes, ventilation systems and cable gates to be seen, in favour of more environmentally friendly, green and well-utilised roof surfaces. He promises that Urbanium will take do their share.

– For us it’s about optimising the landscape around us so we have the least possible negative impact on the environment and our buildings have the greatest possible positive effect on the city environment. Bluegreen roofs will play a major role in future construction in order to achieve this, concludes Pay. 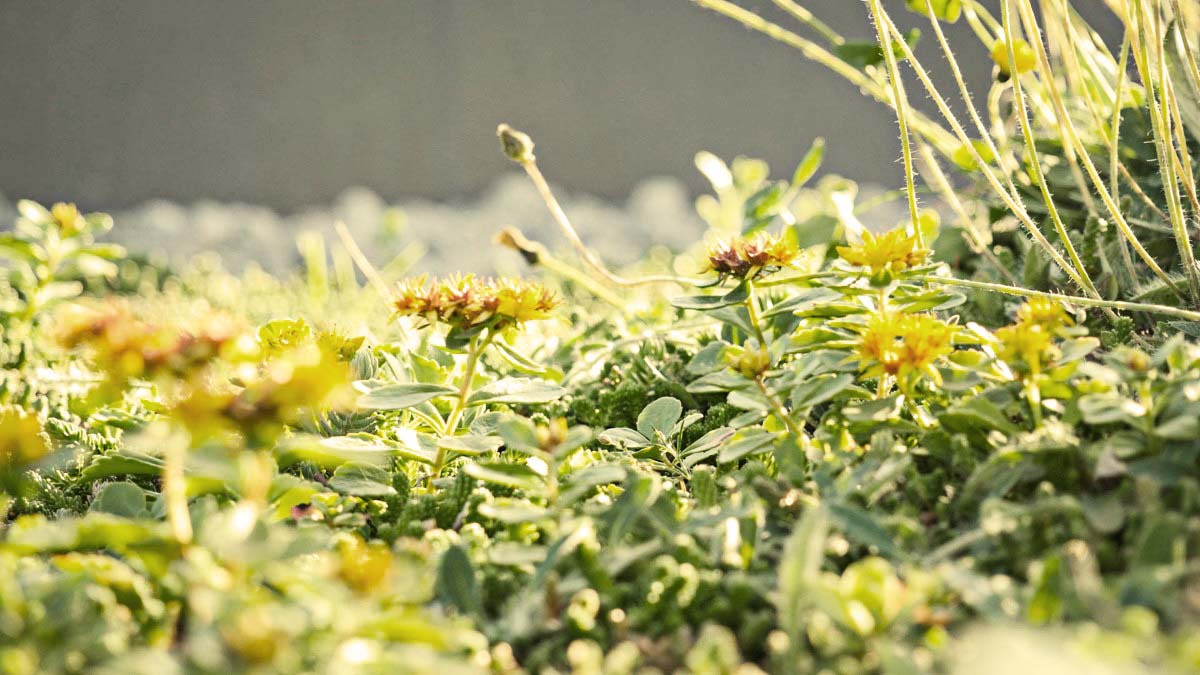 Succulents, sedum growth and bees are very happy at the top of Hausmannkvartalet (Photo: Christian Bjørtomt)

Protan BlueProof Green combines secure surface water management with a green garden on the top of a building. This is what we call a bluegreen roof.